Dr. Dennis Doxtater, a professor at the University of Arizona College of Architecture, Planning, and Landscape Architecture, has found evidence of such patterns in his studies of ancient architecure in areas as diverse as Scandinavia, Crete, and Chaco Canyon in the US.

In examining these sites, Dr. Doxtater faced a daunting analytical problem: how to identify specific patterns--and combinations of patterns--among collections of built sites and natural landscape features, and how to assess the likelihood that such patterns were the result of design rather than chance. In addition to having to compute complex relationships among points on a spherical surface (the study areas are too large for flat-surface approximations to be valid), he had to be able to peform these calculations rapidly and repeatedly for ad-hoc collections of random site points.

Professor Doxtater approached Cross River Software to design a solution to this problem. We examined the possibility of using off-the-shelf software but were not able to find an application suitable for this task. General-purpose programs such as Excel (spreadsheet) or ArcInfo (GIS) would have been too difficult to adapt and/or too slow to process, test and display the extremely large number of pattern possibilities that exist among even a relatively small number of sites. 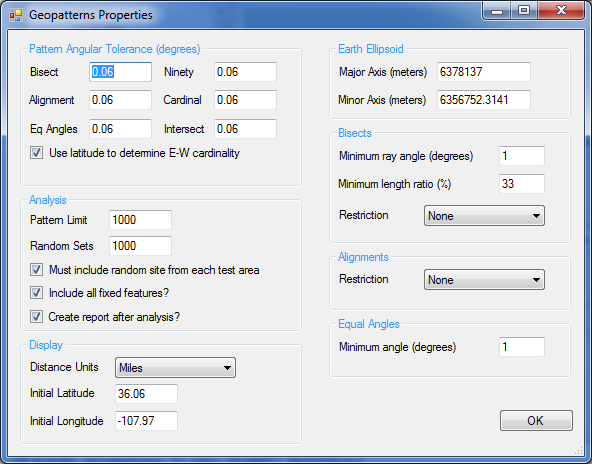 We created a specialized Windows Forms-based application called GeoPatterns to meet Dr. Doxtater's unique requirements. GeoPatterns allows a user to choose among various types of geometric patterns--such as alignments and bisect relationships--and to combine these atomic patterns to form complex pattern combinations. GeoPatterns then tests these pattern templates against a set of geographically separated natural and man-made features to find matches.

GeoPatterns is a WinForms .NET application written in C# (a future version will use Windows Presentation Foundation for its UI). The UI features an interactive geographical map component that uses the open-source GMap.NET control.